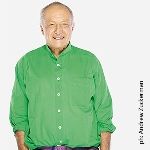 British architect and designer Lord Richard Rogers, 2007 Pritzker Architecture Prize Laureate, to give the 2018 Keynote Lecture. The event will be following an introduction by architecture historian Francesco Dal Co.

Lord Rogers’ best known works include the Centre Pompidou in Paris, the Lloyd’s of London insurance building in London, the European Court of Human Rights building in Strasbourg, the Daimler complex in Potsdamer Platz in Berlin.

1. To attend the Keynote Lecture you will need to display your Cersaie 2018 entrance ticket. The ticket can be obtained either online on the website www.cersaie.it/onlinebooth or during the exhibition itself at the kiosks located at the entrances to the exhibition centre.

2. Please note that attendance numbers are limited. For safety reasons, once the maximum capacity of the venues has been reached, the gates will be closed and no one else will be permitted to enter.

4. Headsets are available for attendees wishing to listen in English 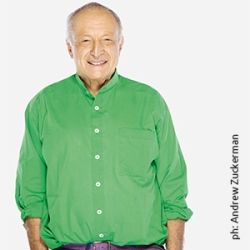 Richard Rogers is the 2007 Pritzker Architecture Prize Laureate, the recipient of the RIBA Gold Medal in 1985 and winner of the 1999 Thomas Jefferson Memorial Foundation Medal. He is also winner of the 2000 Praemium Imperiale Prize for Architecture, the 2006 Golden Lion for Lifetime Achievement (La Biennale di Venezia) and the 2007 Tau Sigma Delta Gold Medal. Richard Rogers was awarded the Légion d’Honneur in 1986, knighted in 1991 and made a member of the House of Lords (the upper house of the UK Parliament) in 1996. In 2008 he was made a Member of the Order of the Companions of Honour.

In 1995, he was the first architect invited to give the BBC Reith Lectures – a series entitled ‘Cities for a Small Planet’ – and in 1998 was appointed by the Deputy Prime Minister to chair the UK Government’s Urban Task Force on the state of English cities and their ability to provide 4 million new homes as well as their potential for revitalisation. The Urban Task Force brought together academics, planners, developers, architects and politicians and its highly influential report, “Towards an Urban Renaissance”, was published in 1999. It was the first government report to advocate a reuse of city centres and derelict land rather than suburban sprawl.

During 1980s and 90s, Richard was an advisor to President Francois Mitterand’s Grands Projets programme in Paris, and from 2000 – 03 he advised the Mayor of Barcelona’s Urban Strategies Council. From 2001 to 2008 he was chief advisor on Architecture and Urbanism to the first Mayor of London, Ken Livingstone. In this role, Richard formed the Architecture and Urbanism Unit to promote the use of brownfield sites, public space enhancements and better masterplanning across the capital. He also advised Livingstone’s successor, Boris Johnson, and continues to be a prominent advocate for better urban planning and for the development of the compact city as the only sustainable way to accommodate an increasingly urban population.

Richard has a wealth of experience in urban masterplanning, with major schemes in London, Berlin, Florence, New York and Shanghai Pudong. With Ivan Harbour, he has recently worked on a major masterplan for Barangaroo South - a mixed-use waterside development in Sydney, Australia - and participated in the Greater Paris project, which looks at the future of the city as a more integrated metropolitan region as it faces the social and environmental challenges of the 21st century.

The idea of the piazza is Richard’s life-long passion. He understands that cities are made by the people that live in them, not by the buildings themselves, and it is the life between buildings that is important, “Cities are a stage where people perform and buildings are the sets that frame the performance. A place for all”.

Collaboration too lies at the heart of his work: “Architecture is too complex to be solved by any one person…I enjoy the dynamic that flows when different disciplines, from sociology to mathematics, engineering to philosophy, come together to create solutions. This integration creates an ethos that best serves, and an aesthetic that best symbolises, the modern world. No-one is more integral to the clarity of a project than an enlightened client.”
R
ichard was Chairman of the Tate Gallery and Deputy Chairman of the Arts Council of Great Britain, and is currently an Honorary Trustee of the Museum of Modern Art in New York, Trustee of Doctors of the World UK and President of The National Communities Resource Centre.

He has recently published a memoir of ‘A Place for All People’ which documents his life, projects and ideas for a better society.

Architect and Professor of history of architecture, IUAV Venice