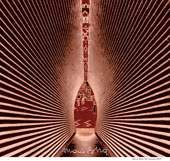 Architecture brings together gravity, form and matter to accommodate human beings and life.
Ceramic originates from Mother Earth. With this image I wanted to recall where we come from, what we are made of, where we live.
And also where we are going: the future is already here.

Born on 1 April 1943 in Mendrisio, Ticino, Mario Botta completed an apprenticeship in Lugano, then attended the “liceo artistico” (artistic high school) in Milan and continued his studies at the University Institute of Architecture in Venice, where he graduated in 1969 under supervisors Carlo Scarpa and Giuseppe Mazzariol. During his time in Venice he had the opportunity to meet and work for Le Corbusier and Louis I. Kahn.

He began his professional work in Lugano in 1970. He designed the first single-family houses in the Ticino Canton and subsequently carried out numerous projects all over the world.

He has always been strongly involved in education and in recent years founded the Mendrisio architecture academy, where he teaches and held the position of director for the academic year 2002/2003.

His works include: André Malraux Theatre and Cultural Centre, Chambéry; the Watari-um art gallery in Tokyo; the Villeurbanne mediatheque; SFMOMA museum in San Francisco; the Cathedral of the Resurrection in Evry; the Jean Tinguely museum in Basel; the Cymbalista Synagogue and Jewish heritage centre in Tel Aviv; the municipal library in Dortmund; the Dürrenmatt centre in Neuchâtel; the MART museum in Rovereto; the Kyobo tower and the Leeum museum in Seoul; the Tata CS administration buildings in New Delhi and Hyderabad; the Fondation Martin Bodmer Library and Museum in Cologny; the church of Papa Giovanni XXIII in Seriate; restoration of the Teatro alla Scala, Milan; the new casino in Campione d’Italia; the Santo Volto church in Turin; and the Tschuggen Berg Oase wellness centre in Arosa. Works in progress include an office and residential complex in Treviso, redevelopment of the former Campari area in Sesto San Giovanni, Milan, the university library in Trento, the Bechtler art museum in Charlotte, the art gallery and museum of Tsinghua University in Beijing, the architecture museum in Mendrisio, the San Rocco parish centre in Sambuceto near San Giovanni Teatino, and the Château Faugères wine cellar in Saint-Emilion, France.